Lover of One God, wife of one man, mother of three sons, creator at heart, and a Jill of all trades – master of, well, a few.

Tylie Eaves is an author, laugher, wifer, and full-time tamer of a small herd of wild animals dressed in human bodies. Born in East Tennessee, she graduated from Sullivan South High School in 1999 and married Wade Eaves, a.k.a. the cute boy from criminal justice class, in 2003. She attended East Tennessee State University and majored in subjects she has yet to use in her career.

She followed the cute boy from criminal justice class all over the world, and amassed an impressively disjointed professional resume of her own, as his career with the United States Air Force began to flourish. They welcomed their first wild animal, an adorable bundle they named Noah, in January of 2007. Noah was followed closely by wild animal número dos, Caleb, in 2008. And their grand finale, Isaac, joined the pack in 2011.

Shortly after becoming parents, Wade and Tylie realized that raising kids on a single income would result in inevitable poverty. But, both also felt strongly about Tylie’s desire to stay at home with their tiny lords of chaos. Thus began the saga to find sustainable work Tylie could do from home. Being the patient, loving man he is, Wade bravely navigated the struggle as she tried her hand at medical transcription, administrative support and even virtual assisting. Finally, Tylie decided to focus on finding work that capitalized on one of her favorite things – writing.

She found success as a copywriter and wrote her way into the role of decently-paid professional content creator. After some time though, she began to notice a lack of integrity in the digital marketing world and soon found herself at a crossroads. With Wade’s encouragement, Tylie resigned from her post to start her own content marketing firm, founded on a bedrock of Christian ethics, in January of 2012. The company (Vertu Marketing LLC) grew quickly and soon Tylie had a team of great people behind her. Together, they continue to serve some of the world’s most prominent companies to this day. 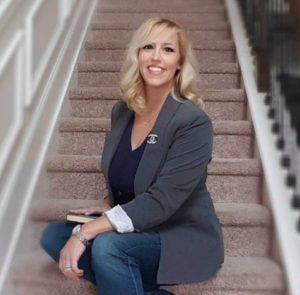 For a long time, Tylie convinced herself that she was living her full purpose as a business owner. She found her work rewarding and fulfilling, but something always seemed to be missing. She knew God was calling her to create Christian fiction, but the journey seemed too big, too impractical, too different and too far outside her current wheelhouse. She allowed fear to keep her from stepping out in faith toward a new goal.

Finally, after way too long with one foot in and one foot out, she stopped running from the call to create and published her first Christian fiction novel, Hangdog – Shoulder to Shoulder, in July of 2018. Now, she’s writing every day while also remaining active with her company. Her team is so supportive in fact, that Vertu Marketing LLC has opened a publishing component, Vertu Publishing, for aspiring Christian authors.

Check out Hangdog – Shoulder to Shoulder (the first of three in the Hangdog series) on Amazon — and don’t forget to connect with Tylie on social media!